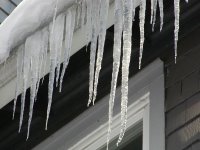 If you think it’s snowy where you are right now, come visit me here in the Hudson Valley. And don’t come empty-handed. I’m dying for a vanilla latte.

With Nate visiting friends for the weekend, I grabbed the baby and hightailed it up to my parents’ place where I will be most happily cooked for, cleaned up after, and told repeatedly to “go. Relax. Take a bath.” Most Jewish mothers tell their daughters to eat something when they walk in the door. Mine tells me to take a bath.

Thalia loves coming here because she gets to to eat homemade organic applesauce that my stepfather makes her, even if she does pay for it in bowel misfunction later. She also gets to play on the floor without the threat of electronics falling on her head. A 9″ RCA television passes for technology round these parts.

Home in Brooklyn right now, my baby might be staring out the window watching handymen unburden sacks of rock salt, while grumpy dogwalkers keep the snowdrifts from remaining that boring white color. Instead Thalia’s enjoyed the escapades of Mama and Papa Cardinal, the bluejay bullies known as the Gang of Seven, fierce downy woodpeckers fighting over a feeder full of suet, dozens of roly-poly finches, a tufted titmouse, a yellow-belly sapsucker, a few black-eyed junkos, and a lone redtail hawk who, as my mother puts it, thinks this is all just McDonalds. If you watch long enough, evidently he’ll fly right into the picture windows. Top that, Baby Einstein.

My mother is an educational consultant, once your favorite grade school teacher–the one who let you sit cross-legged in a circle and write poetry and call her by her first name. She can quote Howard Zinn and Women who Run with the Wolves, but isn’t above a good Will Ferrell movie, even if she can never remember his name. She refuses to color her boy-cut silver hair, and for a time only wore shoes if they were red. She stopped as soon as she became known as The Lady with the Red Shoes. Her husband is an environmental educator and fisherman, a real-life Grizzly Adams type who sports a santa beard and hiking shorts year round (yes, even today, only with a pair of pilled, navy longjohns underneath). He has never heard of Angelina Jolie. He also makes a mean chicken soup, which is the only consolation I have if the Second Avenue Deli never reopens. A pot is on the stove right now and if you’ve got a snowplow and a pair of snowshoes you’re welcome to join us. Lunch is at 1.

I love coming here because they give me all the highlights of that week’s Air America/the Nation/Paul Krugman/NPR/Mother Jones/heresay/innuendo. Imagine Best Week Ever with a liberal news spin and you’ve got dinner up at my mom’s house.

In less than 24 hours since my arrival, I’ve already learned that:

I admit it’s a lazy way for me to get my news. But sometimes, a new mom just needs a break from the conservatively-biased media.

I am my mother’s daughter.

{Comments Off on Me, Nanook}