If I’ve learned one thing in my short tenure as a parent, it’s that you cannot plan anything when it comes to your child. It goes back even before the birth, when you ask been there-done that friends whether you really should have a birth plan and they laugh at you. Birth plan? they cackle. The birth plan is you go to the hospital and get that baby out of you by any means possible.

I thought I’d avoid dressing her in pink.

I thought we’d spend hours together listening to classical music.

I thought we’d have family dinner time, with the TV off.

I thought the TV would be off a lot, in fact.

I thought even if we did watch TV with her, it would never ever be something like Deadwood. (“I don’t want her first word to be cocksucker,” I told Nate last night. “If her first word is cocksucker, I will laugh so hard,” Nate said.)

I thought I’d never feed her something that had fallen on the floor. Under the couch. In the dog hair.

I thought she’d never eat a french fry, at least until she was twelve. 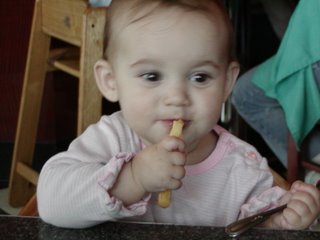 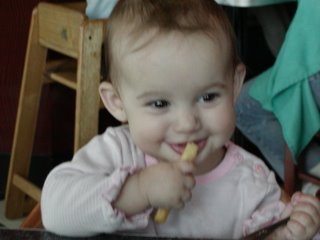 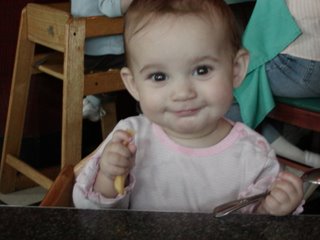 I also thought the sleeping arrangements would be a bit different. “We’re not going to co-sleep,” I distinctly remember telling Nate one night as I rested my third trimester cankles on his lap. “It’s not good for our relationship.”

Well once again I was wrong, but not in the way you’d think. The fact is, we have not co-slept. What we have been doing, rather, for the last 11 months and 7 days is best described as co-not sleeping.

There’s something comforting about feeling her skin next to ours, hearing her gentle breaths, waking up to her grabbing my nose and giggling. But the three feedings a night is starting to get to me. Also, Thalia’s nasty new habit of sleeping horizontally which forces us to the edges of of our inadequate queen-size bed while one lucky winner gets kicked in the face all night as a special bonus treat. It was those mornings when my lips still felt raw from a 2 am roundhouse to the mouth that I reminded Nate about the beauuuuuuutiful like-new crib mere inches away from our bedroom door.

There was always a business trip coming up, a visit to grandma’s, a something-or-other that made him insist, “this is a bad week. Maybe next week. Yeah, next week.”

I’m not ashamed to say I’m tired. I’m done. It’s been fun and thanks for all the memories, but I’m ready to send you into the scary crib of doom which you will eventually learn to love, dammit.

All of which would be fine and dandy except for one major obstacle.

I thought he would be the dad who could plop her in the crib and let her cry. Tough Love Nate, I’d call him. And I thought I would be the mom who’d curl up into a ball on the floor outside her bedroom door, sobbing along with her while Nate pats my back and reminds me how this sleep-training business is all for the best. But I thought wrong. Again.

“One year,” he said last night. “I promise. It’s a nice round number and next month we’ll do it. Really.”

So now I’m planning on it.

Will I ever learn?

{Comments Off on The No-Sleep Sleep Solution}