I don’t get in “blog wars” on this blog. Never have. Well, maybe once I kind of did, and it was political, and I semi-regret that but not for the reasons you think. Mostly because I emerged with my favorite shoes scuffed and I broke a nail and missed the first ten minutes of Sopranos over it.

I am passionate, I am feisty, and I am opinionated–but I always have always encouraged thoughtful discussion and dissent. I can’t control my readers entirely, because I think they have a right to strong opinions too–however I do my best to set a respectful tone in comments and to encourage people to attack the idea and not the person. I fail sometimes. But I try.

I can see why the some of the bloggers participating on the Corn Refiners Association Blog Tour were hurt this week. Now, not all of them were. Several commented here or emailed me and kindly thanked me for the way I handled my post. (Gracias MomStart.) Some others just felt beat up or were attacked on their own blogs. That bums me out.

I never told people to take down their posts, or to pull out of Mom Central (although several bloggers did of their own accord after receiving the CRA pitch), or to boycott HFCS even.

If you think I did any of those things, I’d encourage you to please read my post carefully.

My point, aside for not being on Team HFCS, is simple: We must own our words, particularly in our brand relationships. And in order to do so we should make sure we’re informed to the degree we can be.

Part of that is recognizing that when you participate in a controversial campaign, whether it’s promoting HFCS “facts,” vaccinations, circumcision, formula practices or politics, you have to be prepared to potentially take some heat and face some dissenters. People like Mom Slant, PHD in Parenting, Queen of Spain do that every day.

That’s the crazy thing about the nature of controversy.

In any case, I feel terrible for the participants who feel bad the same way I felt terrible for the Nestle Family bloggers. I don’t think they’re all whores and sell-outs, and I will never condemn them for what they put in their bodies or in their children’s bodies, or even for what they choose to endorse if they can stand behind their decisions. Should I need to extend an olive branch, I’m doing it now.

Now this is where normally my post would end.

Bye! Have a great day. Be back tomorrow with a funny story about my kids.

And then I read this last night: A post by Stacy Debroff, CEO of Mom Central, who, understandably dismayed by the level of animosity towards her client and this campaign, takes me on by name, attacks me personally, calls me a borg (yes, a borg), and attributes all sorts of things to me that don’t sound familiar at all. {note: you can now find the post here via Google’s Cache, since Ms. Debroff has attempted to scrub the post.}

Let’s just say, ask me about the Lindberg Baby sometime.

Skipping past the cute passive-aggressive digs like how I’m a good mom “by night,” I really had half a mind to ignore it.  It’s all such a load of garbage complete with convoluted Star Trek metaphors, and can be easily put to bed just by clicking to my actual post (should she have had the integrity to link to it in the first place). I decided to sleep on it.

I woke up clear-headed, with the idea of going there, leaving a thoughtful comment to ask readers to decide for themselves whether her accusations of me were true, reasserting that I never once pressured anyone to take down their posts despite her accusation to the contrary, and moving on.

Turns out some bloggers had already said those very things.

That’s when she started deleting any dissenting comments. 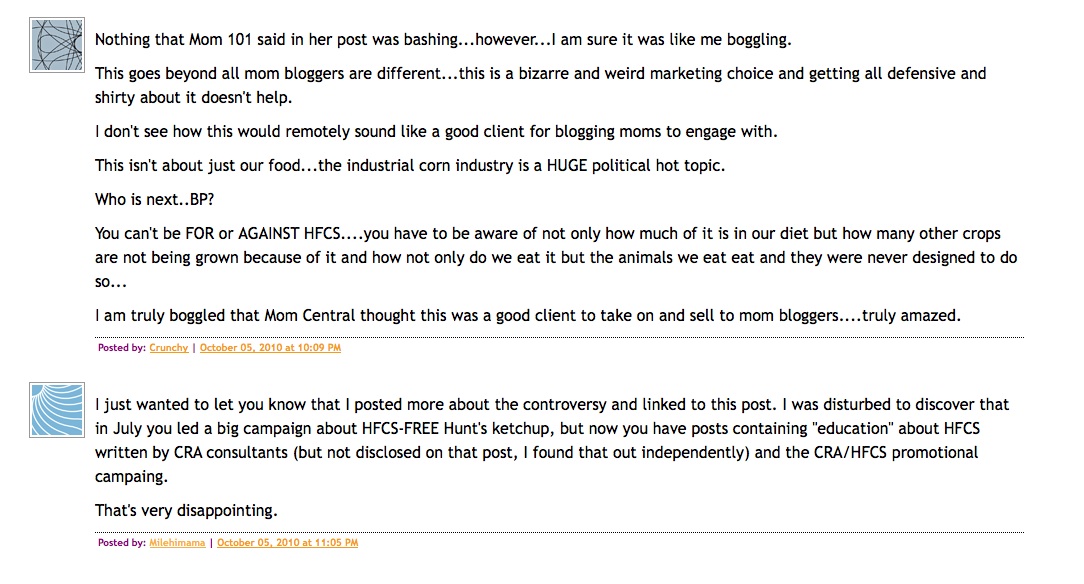 Plus one by Clark Kent’s Lunchbox that was pretty funny. One by backpacking dad. And who knows what else that was posted after I went to bed.

And then Stacy Debroff closed comments on her post completely, leaving up only the two that agreed with her.

On a post all about accusations of group-think and first amendment rights and encouraging dissent and not attacking bloggers, she attacked me, attacked any blogger who shared my views, took down dissenting comments, then closed the discussion.

This all from “America’s most trusted mom.”

The deleted comment that really angered me the most was this one from Mindi Cherry of Moms Need to Know, a woman I’ve never met, but who seems reasonable and smart. She was a former Mom Central reviewer who decided to pull out of the network after receiving the CRA pitch. 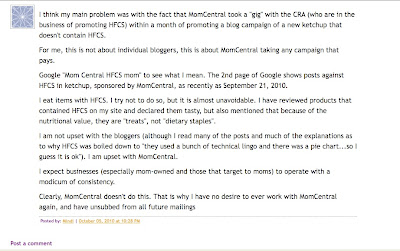 [edited to add: Stacy has since amended her blog post with a note that reads

Of note: late last night I regrettably had to close and take down all comments to this blog post as it came under sustained attack along with profanity and trash-talking by those supporters of Mom 101 and HCFS.

Three of those comments are posted here. They are neither profane, nor trash-talking, nor were the other two that I saw. They simply disagreed with her.]

In any case, whatever accusations are being lobbed at me, I continue to own my words. I’m proud of my post yesterday, and 99% of the comments that it generated too. I’m proud of how the discussion unfolded, and how even dissenting commenters and representatives from the CRA were allowed to speak their minds. I’m proud of remaining intellectually honest and refuting junk studies, even ones that support my POV.  I’m proud that the word “douchebag” didn’t come up once, not even by me. (A record!)

I’m proud of how we as a community, through discussion and debate, can grow and learn and maybe come out smarter. Not just by talking about how we should allow dissent, but by actually allowing it.

I think that’s the real meaning of integrity in blogging. And that’s the best of what the community can be.

If that makes us a Borg, then nanu-nanu.

129 thoughts on “On ethics and integrity. The real kind, not the pretend kind for your media kit.”