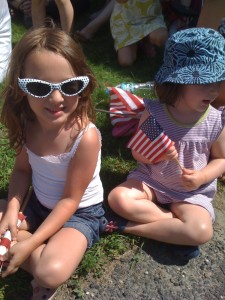 My cynical, hardened, don’t-F-with-me-on-the-A-train New York exterior is all a facade. I admit it. Inside, there’s a girl with a thing for the Fourth of July and all its trappings. Especially small-town parades.

In the Vermont town we’re staying this week, spitting distance from the Canadian border, they happen to have this very thing. It opened with an adorable young woman in a gazebo at the mic, stalling for time while the sweaty crowd sat waiting for clowns on ATVs, maybe some Shriners.

“So…have you heard the one about the liberty bell? It cracked me up! Okay, wait…I’ve got another one…”

Next she introduced Eva, who did a fine Christina Aguillera National Anthem impression. Not the good singing part–just the skipping all the lyrics part. She went from Oh say can you see by the dawn’s early light right into the bit about the ramparts, and the crowd was kind enough to skip right along with her.

(Why does everyone always want to get to the ramparts so quickly? No one even knows what a rampart is. I have never seen a rampart, I’ll tell you that much. Although if I did, I would be sure to tell it that it is very popular with amateur National Anthem singers who never want to sing about hailing the flag or the twilight’s last gleaming or even the perilous fight, when really, they can just skip right to the ramparts.)

I have no idea who Eva is, but I know she loves singing, and she loves her country and George M Cohan, and the crowd seemed to love her right back.

Not two minutes after the parade finally kicked off, we learned that the thing to do now in a small-town parade is to throw candy. Which means if you’re a kid, the parade becomes less about flags and waving to the fire engines and girls driving the pink Barbie cars, less about America and flags and baton twirling, and more about stuffing your pockets with candy.

The kids were mostly polite, though I did witness a few bouts of Extreme Full-Contact Candy Scavenging. (Yeah, I saw what you did, kid in the blue baseball cap with the glasses. Don’t think I didn’t.) Sage, no match for the bigger kids around her, stood patiently with her hands stretched in front of her and her palms cupped upward, just hoping just one marcher would toss a strawberry Tootsie Roll right into her sweaty hands. Fortunately, a few did. I know this because they are currently melting at the bottom of my purse.

We were having a grand old time chasing candy and cheering and waving to shriners and clowns and the guy driving a Conestoga wagon and chasing more candy–until a pro-life high school club marched by. Which…awkward. This is liberal New England-y Vermont after all, the fourth state to legalize gay marriage. The one saving grace was that clearly every boy in that club was gay (if not aware of it just yet), so there was kind of a way to justify clapping for them if you really felt obligated. And I say that not as a jab, but as a reasonable observation informed by 8 years living across from the Stonewall Tavern.

Fortunately none of them threw candy. That would have been weird.

Judgment day is coming! Jesus sees all! Have a Blow Pop!

We applauded the clowns, the shriners in fezzes (they really exist!), the firetrucks, the vets (yay vets!) , and the little girls riding ponies. We applauded the guy on stilts and the “World’s Longest Cadillac Procession” which I think only had about 5 cars in it. We even applauded some woman who dyed her poodle pink–which is not actually one of the American flag colors, so hopefully it was not just for this occasion.

The greatest moment of the entire parade though, might have been the blue-vested Girl Scout troop handing out squeeze-ice to all the kids along the route; in their perfectly Girl Scout-y way, they made sure every kid who wanted one, had one. That right there is your Thin Mint money being put to excellent use.

Finally, it closed out with an awesome progressive performance troop called Bread and Puppet, which believes in Cheap Art, political absurdity, and not shaving one’s armpits. My mother would love them.

I have no doubt they were having a grand old time wondering just what to do with the pro-life club when they all reached the fairgrounds together.