Last night, feeling a bit punchy after a long day I tweeted Sometimes it’s just easier to say yes, you can have a lollipop, than to come up with a reason why not.

It’s true. Not because I don’t know how to say no. (See also: The stale Halloween candy that turn into goo in our pantry every year until we finally toss it the following October.) But because sometimes there is not a particularly good reason to say no to your kids.

I say no as a knee-jerk reaction a lot. I’m trying to learn to say yes more to harmless requests that make my kids happy. Thalia wants grated cinnamon on her pasta? Sure. Sage wants to skip all the way to the subway station? Eh, why not.

While mostly Twitter friends last night  laughed or agreed or whatever it is people do on Twitter when we’re feeling generally good (or honest) about ourselves, there were a few more surprising reactions. These included calling out my parenting skills and ability to make sensible decisions for my children with the implication that “I owe them better.”

Then, a whole bunch of people I don’t know at all, spun the debate into something I had nothing to do with, because I had shut the computer to read bedtimes stories to my kids.

Breastfeeding? CIO? Mommy wars? Sooooo 2007. Last night, a small minority of the parenting world reduced itself to non-ironic fights about whether lollipops are the downfall of our children. Or maybe just my children.

Weirder yet: these people didn’t even live in Park Slope.

Despite the fact that I thought the entire thing was hilarious, and that should my waif-like children gain a single ounce from eating lollipops it would actually be a win–I thought I’d clarify my thinking about lollipops and children. Eh, maybe it will be helpful to those six parents who care, or who are looking to form their own rules and perspectives around the perceived evils of organic cane sugar and pumpkin-derived orange food coloring on a stick.

1.There are parents who claim their children have NEVER WATCHED TV or NEVER EATEN FAST FOOD ONCE or NEVER EAT SUGAR EVER and NEVER BUY THOSE HORRIBLE, UNNECESSARY TOYS WHEN WE HAVE PERFECTLY GOOD STICKS, ROCKS AND LICHEN IN OUR BACKYARD. I salute your commitment.

In fact I still remember the mom on a message board 7 years ago who bragged about giving her one year old a candle in a pumpernickel bagel spread with cream cheese because she was horrified by the idea of her child tasting cake. I saluted her commitment too. And felt bad when 600 anonymous moms flamed her for it.

2. I happen to believe in everything in moderation. Except for broken crayons, of which we own far too many.

3. I am convinced that giving my children lollipops will make them like me more which as we all know, is our main obligation as parents. This is why my children are limited to no more than a 17 an hour, but only after 10AM which seems entirely reasonable. Except on Sundays.

4. On Sundays, lollipops do in fact make excellent breakfast food, especially if you roll them directly in cereals like Count Chocula. I call it The Vampire Suck, and the kid go keerazy for it. 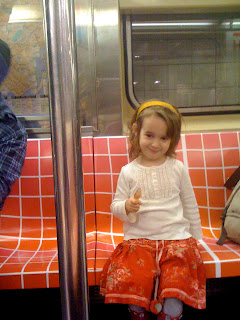 My terrible parenting skills: Exhibit A.

5. Hyperactivity claims linked to single lollipop consumption are grossly overrated. My five-year old was still able to fall asleep at 11:30 last night and hello? That’s not even midnight.

6. Sugars are not poison. That’s not my quote. It’s Marion Nestle’s. On the other hand, Arsenic is poison so we make extra sure to label the Arsenic bowls in the kitchen really well, to differentiate them from the sugar bowls.

7.  There is actually a band called The Lollipops and they have a song called “I Will Not Harm Your Man.” Coded message perhaps?

8. Telly Savalas was frequently photographed eating lollipops and never killed a single person. Ghengis Khan was never once photographed with lollipops. You draw your own conclusions.

Now, armed with the essential lollipop information that you have no doubt looking for from the very moment you peed on that stick, go forth and make your own parenting decisions.

Stay tuned for the post in which I describe the time at a Madrid street fair that our children ate cotton candy bigger than their heads–and lived to tell the tale.

120 thoughts on “Sometimes a lollipop is just a lollipop. (Apologies to Dr. Freud)”