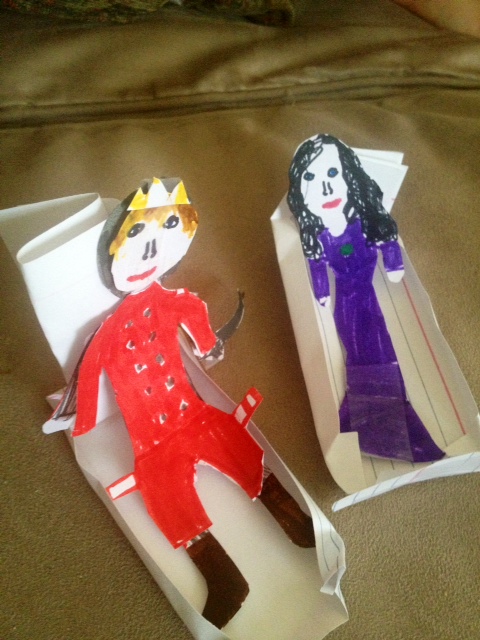 Over the past few weeks, by some strange coincidence, I have ended up in several discussions with parents who either never watched TV as kids, or don’t allow their own children now to watch it at all.

Not “no commercial TV”–but no TV, period As in, none.

Or ahem, that they know of.

In some of the discussions it just came up over the course of conversation, but a couple of times it felt like Textbook Sanctimommy 101, especially when coupled with a gratuitous make-your-own kale chips reference. And honestly, I’m just really not used to that anymore. I suppose I’m lucky to live in a community where once your kid hits school-age, most parents could give a crap whether someone else makes chicken nuggets from scratch, co-sleeps, or stocks the pantry with organic peanut butter.

Then again, it is possible that they’re just talking about it behind my back and I’m completely oblivious.

(Actually, I do make chicken nuggets from scratch.  But you’ll pry my Skippy out of my cold, dead hands, organic peanut butter people!)I’m all for parents making their own choices for their kids. We are at least entitled to that much, provided it’s not hurting their kids or mine But what I’m not down with is a parent claiming moral superiority with the no TV thing, telling me “we’d prefer him to use his imagination instead.”

Clearly I am still learning new parenting stuff every day. Because I had no idea whatsoever that television and imagination were mutually exclusive.

Frankly, I’m tired of the stereotype that every kid who watches TV is some pathetic zombie child, neglected by uncaring parents, and left alone to learn about high-sodium Happy Meals and the side-effects of Viagra during breaks. I’m exhausted of the technophobes suggesting that every preschooler tapping on that iPad game on the subway is atrophying brain cells by the second. And God, I’m completely over the judgey accusations from so-called experts on TV who get more airtime arguing that a child engaged in screen time is squarely on the path to mediocrity and despair.

And the next thing ya know your son is playin’ for money in a pinch-back suit. Listenin’ to some big out-a-town Jasper hearin’ him tell about horse-race gamblin’ Not a wholesome trottin’ race, no, but a race where they set down right on the horse!

Are there some parents who stick a screen in front of a kid indiscriminately and without limit? Of course. But since when do we point to the lowest common denominator as examples of parenting as a whole? I mean, aside from Dr. Phil.

My experience hearing from hundreds of parents about tech and children over the last few years, is that the great majority of parents are curious, interested, and actively seeking the balance of media in a media-saturated world.

In other words (cliché alert)… all things in moderation.

I have my own TV rules of course as I’m sure you do. Bratz and Monster High are on the blacklist for sure. Thalia has begged to watch Homeland with me and I told her to ask me again when she’s 24. Also, we try to avoid the local news. Some of you make take issue with that, but I even cringe a little putting on 1010 WINS for the traffic report in the car, knowing that we’ll have to get through a lead story about babies falling out of buildings or a teenager shot by their grandmother first. I feel like there’s time later to understand the evil in the world; I don’t mind starting with fantasy evil first.

And a lot of that comes from TV and movies. 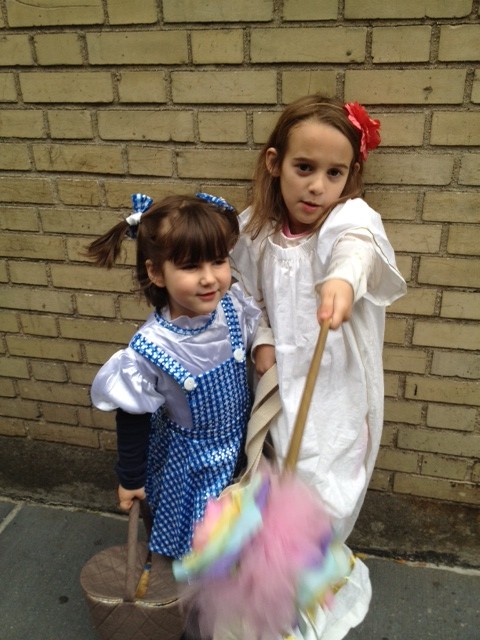 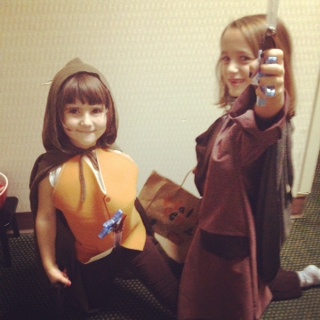 After noticing my little Frodo and Sam continue their hunger for  fantasy and adventure, they fell madly, deeply in love with the TV series, Once Upon a Time.  It’s probably a little dark for some kids (I know mine, like you know yours) but it’s enchanting and fun and captivating and I really love that we can watch it together. It also gives them the opportunity to work through important if difficult themes that are  missing from most kids’ entertainment these days, films being so perfectly sanitized for our protection.

In fact, it’s jam-packed with teaching moments, opportunities for discussion, and even (gasp) creative play.

After each episode, we entered into the most wonderful Socratic conversations about all of it: Good versus evil,  free will and choice, the power of love, the cost of happy endings, and the possibility of magic in the world.

Ask my six year old to define symbolism, foreshadowing, character arc or cliffhangers and she’ll school you good. Plus, it’s awesome that every time an apple appears, they scream SYMBOLISM! in unison.

(Eh, I’m a writer. Literary devices make me all tingly inside.)

I’ve watched them bring the characters into their imaginative play in ways I could not have conceived: role playing the characters, creating sketches and plays, writing songs, drawing pictures, penning scribbly graphic novels about Red Riding Hood turning into a wolf. Just last night they created some sort of Olympic style competition with teams made up of the fairy tale characters from the show complete with score cards. Spelling not withstanding.

But man, A for Effort on “Rumpelstilskin,” right? Even autocorrect doesn’t seem to know that one. 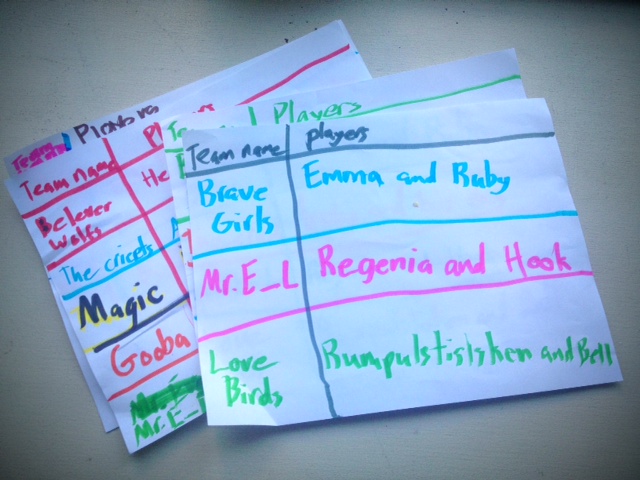 Once was a gateway to the British series Merlin which we found on Netflix, and it now has my girls smitten with the legend of King Arthur. They’ve asked to research Camelot on the computer, battled with pretend Excalibur swords, made paper dolls of the characters with fully functioning helmets and swords (as far as paper can be functional in medieval battle) and  one night with my parents, made us spend an entire dinner in character. 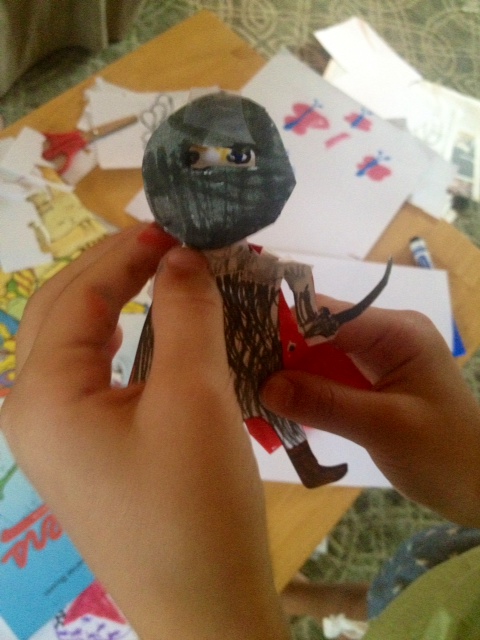 Lucky me, I was Merlin. Their Papa had it a little tougher as Uther Pendragon.

(And weren’t they shocked when he “guessed” Uther’s last name. “How did you know that?” Sage asked with wild disbelief. “Well,” he said with a smile, “I was reading about Camelot before your mother was even born.”)

Merlin in turn lead to the Princess Bride–and, hallelujah Jebus, for I have counted the hours until they were old enough to love and appreciate what is pretty much the very best movie ever created. They were so taken with it Thalia wrote out her favorite lines on index cards and made us walk around wearing them all day just because it made her laugh. She also ran around yelling, “anybody want a peanut?” for weeks. 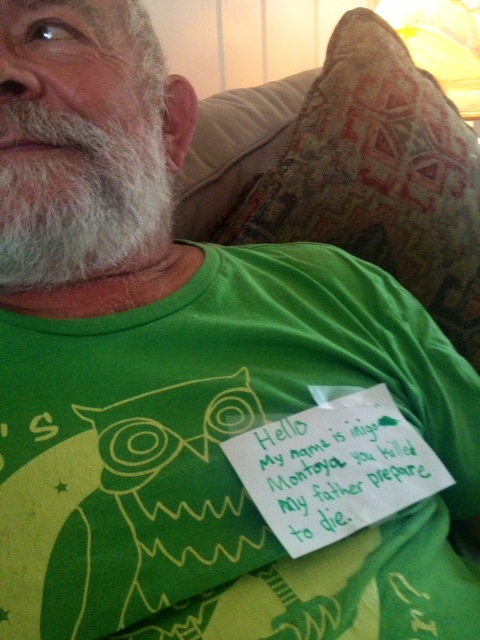 So I guess the first question is, would they have fallen in love with fantasy, mystery and adventure from their Oz books and Harry Potter books alone? It’s entirely possible. And books still factor into our free time to a large degree.

The second question: is TV taking away from “other things” they could be doing? Sure. Of course it is.

Yet how can I deny them the special effects, the evocative costumes, the nuances of dialogue and language, and the glorious spectacle that captivated me as a child too?

I admit it: we’re a TV family. We started with “Melmo,” we tore through Dora and Super Why, we got excited about math with Team Umi Zoomi, we learned the dancey-dances from Yo Gabba Gabba, and now we’re hitting the fantasy series for older kids, with a little X Factor thrown in until they’re old enough for Glee.

Now admittedly, it’s not all quality television. I think I die a little inside every time they ask to watch My Little Pony Equestria Girls. But when Sage dresses up in crazy clothes and informs me “I’m Rarity, the fancy one, and her element of harmony is generosity!” I have to smile. I don’t entirely know what that means but learning about generosity just doesn’t sound so bad to me. Even if it is coming from a squeaky-voiced pink horse with false eyelashes.

And hey, if your fifth grader watches no TV, sleeps with handmade cornhusk dolls and play only with rocks and sticks and the occasional lichen, more power to you. I have no doubt you’ll get it into your kid’s college application form somewhere.

56 thoughts on “Yes my kids watch TV. Alert the authorities.”